The sisters seem to be absolutely serious about their faith, but I’ve never seen such a merry group of women. This confirms what I’ve always thought, that believers should, by nature, be cheerful.

The other day, when we’d had Sister Ologaya’s favorite dish, molokhaya, plus roast chicken and rice, she told me she was stuffed. She’d had molokhaya, two servings of rice, two pieces of pita bread and two bananas. “I’m getting fat!” she wailed, smiling. 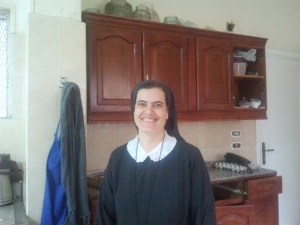 “Do sisters worry about things like their looks?” I asked.

“Not usually. Sometimes there is a sister who is truly beautiful in the eyes of the world, but what we concentrate on is having Christ’s beauty grow in us. Then we are truly beautiful.”

She told me a couple of stories.

“A Muslim person was complaining to someone else about the luck of the Christians. ‘Why is it that it’s always the Christians who are the most beautiful – and also so rich?’ this person asked.” I supplied the answer.

“Because Jesus blesses His children. There is blessing in following Jesus.” She nodded her head, and went on to tell another story.

“Someone went to a wise man and asked him what the best religion is. The wise man answered, ‘I won’t tell you, but you go and find the people who are the kindest, the most loving, the most forgiving, the most honest, the most generous, the most cheerful, and the most patient of all those you meet. Find out what religion they are, and you will have your answer.’

These are the qualities I find in the sisters here. I think I lack many of these qualities myself, but these are the qualities I want the most in the world. What a wonderful world this would be if we were all kind, loving, forgive, honest, generous, cheerful and patient. That’s why it is such a joy to find this group of Christians who really seem to live Christ-like lives. At least they strive to do that, just as I do, and I see many cheerful faces here.

There are aspects to their faith that I, a Protestant, find bewildering, but also intriguing. I’m incredibly attracted to their combination of joy and gentleness. The sisters and also the staff here all have warm, loving eyes. They have no difficulty looking long and lovingly into mine. That’s nice, but also a little embarrassing. Embarrassment about such things, though, is a feeling I would like to overcome. I wonder how much of this gazing into one’s eyes comes from their gazing into the eyes of the icons of their favorite saints. Sister Elleria is overjoyed to have a picture post card from me of Joan of Arc – so that she can look long and lovingly at her picture, receiving strength and inspiration from it.

Sister Maria tells me one day in an off-hand comment that she often thinks about what it was in Mary, the mother of Jesus that inspired God to choose her, of all women, to be Jesus’ mother. She thinks about Mary’s personal characteristics a lot. 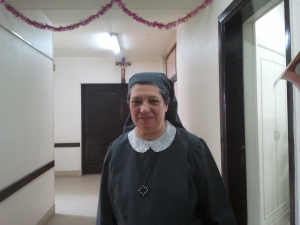 But then, she’s named after Mary. Come to think of it, so am I. Marie is my middle name. Something for me to think about.

“She appeared to many, many people, many, many times. Even General Nasser saw her. Both Muslims and Christians saw her. She appeared especially often during the year before Mubarek was deposed. She looked like a real woman, standing on the roof of the church, with her arms outstretched, like you see in this picture. She looked so real, people climbed up onto the roof to tell her not to jump off, but then they found out that it was St. Maria.

“Many miracles happened through her. People were healed of diseases. She was very good for Egypt. We were all blessed by her appearances.”

“Yes, but not there,” she replies.

I am dumbfounded. Sister Maria is a woman with her feet on the ground. She is not crazy, she’s not a dreamer, and she would not lie to me. But this is confounding some of the foundations of Protestant beliefs. Protestants have always criticized what they call excessive devotion, or even worship of Mary.

“You know, she also appeared here at the Center. About a year later. Not like at St. Maria of Satoun, but she appeared here many times too. Here she appeared as light, in the sky, above the Center. She had her arms outstretched, as she did in Satoun. I saw her, as did many others. People, Muslims too, would come to the Center looking for her, thinking she was staying here. She left a scent, a perfume like none other you have smelled. People thought it might be something from relics – you know, they perfume the relics.”

I had noticed that on the day Sister Marina showed me the relics of Santa Marina.

“We had a volunteer here at the time, a French woman. She was skeptical about all of this, so she was unable to see Mary, but she did smell the perfume.”

I wonder if I’d be able to see Mary if she appeared.

These revelations intrigue and puzzle me, but they don’t discomfit me. They leave me marveling. Now I understand why Reda gave me this picture, and also a lovely picture of Jesus. He obviously meant for me to contemplate them. That seems to be what Copts do. I will hang them on the wall near my bed and gaze at them, allowing the thoughts to come. I will not let embarrassment or judgmental thoughts about the taste of the artist stop me from it. I will welcome what comes.