This morning I wake up refreshed, having slept comparatively well last night.  The extra blanket the sisters gave me really helped.

On the way to and from school I notice parents touching their children lovingly.  Here, mothers always carry their babies in their arms.  The roads are probably too bumpy anyway to push a stroller.  I see a father with his arm wrapped around the shoulder of his son, about twelve.  The son appears to have been crying.  I love how these people are so open with their emotions!  When they are sad, they cry.  When they are angry, they also let that out.  I’m not used to that, and when I see anger or irritation, I feel afraid.  But what tenderness there is here!  I love the way these children smile at me, looking long and warmly into my eyes.  I feel almost washed away by this tenderness.  Josuf, one of my sixth-graders, comes to me so eagerly when I ask him to come to the front of the classroom.  Every time I praise him for a correct answer, his entire face lights up.  It melts my heart.  I see some of the girls looking at me with open adoration when I try and explain something.  It embarrasses me, but also moves me profoundly.  I’m sometimes overwhelmed by the number of kids who crowd around me, wanting to shake my hand and say hello.  But I’m also deeply touched.

This morning we do our usual “ABC” song, “Head and Shoulders”, and “Jesus Loves Me”, plus writing the alphabet.  Some of the kids are up to “W” by now.  Kindergarten kids.

While Mariem waits for her mother and I wait for my driver, I help her with her English.  She also looks at me adoringly after I praise her for her perfect rendition of, “Mona baked a cake”.

I ask Marleen, the school director, about the life of the garbage pickers.  They have certain customers they travel to by donkey and pick up their garbage.  It has to be in the area – they are not allowed to travel long distances with their donkeys, or they’ll get picked up by the police.  They get paid to pick up the garbage.  Once they’ve collected all the garbage, they bring it to the garbage area, where they sort it.  Apparently the glass area is next to the school, because I always hear glass being sorted.  Marleen says they sort it by color. 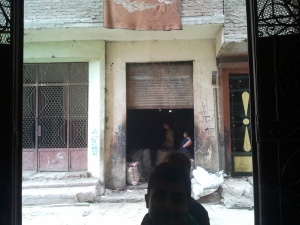 A father and son, presumably, sorting glass across the street from the school

They separate paper and cardboard, and also plastic.  They also collect food waste.  In the past, pigs that lived in the area ate the food waste, but the government has made raising pigs illegal, so I don’t know what happens to the food waste now.  Does it go to the chickens?  To the dogs running around loose in the streets?  The zebaleen (garbage pickers) are able to sell some of what they collect, for a little money.

According to the British newspaper, the Guardian, the zebaleen do raise at least some pigs in the back of their houses.  The article goes on to say, however, that with the swine flu scare in 2009, all the pigs in Cairo were killed.  More than 300,000 pigs were killed in one day, reducing the income of the zebaleen, who raised these pigs to be sold, in half.  In all the days I’ve been working in the school, I have never heard a sound from a pig, although I’ve heard plenty of chickens.  My school is in the second largest garbage area of Cairo.  I guess I’d have to get invited to a few homes to find out for sure.  One thing I do know – these garbage pickers are really poor.

2 thoughts on “Rubies in the Rubbish – Day Eleven”